On a recent trip with my husband to the Boise Army Navy Store, I found this sign:

The illustration is funny, but being the grammar nerd that I am, I spent my laughter on the incorrect spelling of “recommend.”  Hasn’t anyone recommended that this error be corrected?

Criticisms aside, I hope you all have a wonderful Thanksgiving.

…unless you’re not in the United States; in that case, I suppose I just hope you have a good day?  Yeah, let’s go with that.

The beer at this smoke shop might be premium, but the same can’t be said about the shop’s grammar.

I understand the English language can be confusing.  At an early age, we are taught that adding an s to the end of words makes them plural.  Sock becomes socks, caterpillar becomes caterpillars, and airplane becomes airplanes.  However, every now and then you need to pluralize a word that already ends with an s, or one that ends with an x, z, ch, or sh.  If you simply add an s to the word box, you end up with the word boxs, which, when spoken aloud, sounds like an utterance of a slurring, drunk person.  This is why–complex as it may seem–some words are pluralized with an es rather than just an s.

Someone at Sonic missed the memo.

Today I attended an 8-year-old’s birthday party at a local arcade named Pojo’s.  Though I spent (ahem…wasted) about ten dollars trying–and failing–to win the stupid Pile Up game, taking these photographs didn’t cost me a penny: 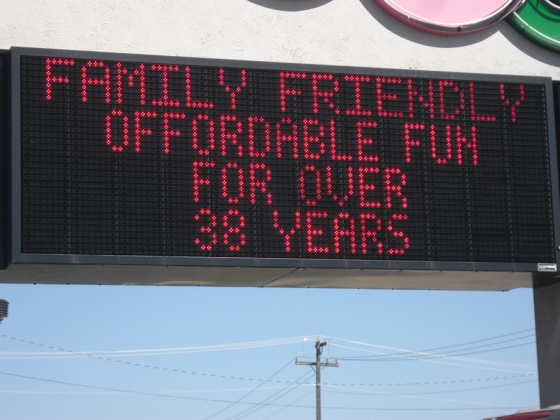 Offordable.  Offordable?!  Of course, the sign is supposed to be advertising “affordable” fun, but what I’m seeing is a word pronounced “offered-able.”  But hold on–it gets better!  Once inside, I snatched up some of the pamphlets and flyers on display that advertise special events and birthday party packages.  One pamphlet describes Pojo’s as “tobbaco free” (correct spelling:  tobacco), while the other exhibits numerous examples of apostrophe abuse.  In fact, despite the presence of the apostrophe in the Pojo’s sign (see picture), neither the pamphlets nor the arcade’s website include an apostrophe in the name.  So, what’ll it be, Pojo’s?  Apostrophe or no apostrophe?  Make up your mind, already!

Honestly, I was going somewhere with this rant.  I think the employees at Pojo’s could really stand to benefit from the quarters I wasted on Pile Up–they should consider spending them on a dictionary!

I probably shouldn’t be surprised that a business called “Fish Aquariums and Stuff” would misspell the word clearance.

Following my latest post, it is pure coincidence that I passed this KFC sign.  Is it possible that the everlasting rumors about KFC using genetically mutated chicken are true?  “Snow” cones aren’t really made of snow, and one of the world’s most popular suppliers is called SnoShack.  Notice the missing w?  Maybe “chicken” is missing a c because these bites aren’t really made of chicken.

Which begs the question, what is “chiken”?  Let’s play another round of DEFINE IT!  Leave your clever definitions in the comments section and let’s see if we can figure out just what $4.99 will get you at this KFC.

Today I am celebrating my many freedoms as a citizen of the United States of America. Included in these freedoms is my right to criticize poor grammar. After all, Independence Day is more than history, stars and stripes, and colorful explosives; it’s also a day that has not failed to provide me with some good blogging material for three years in a row. (See: 2010 and 2011).

This year, my 4th of July post comes to you courtesy of a local veterinary clinic.

This grocery store is selling vegetable savers, but their grammar is what needs to be saved. 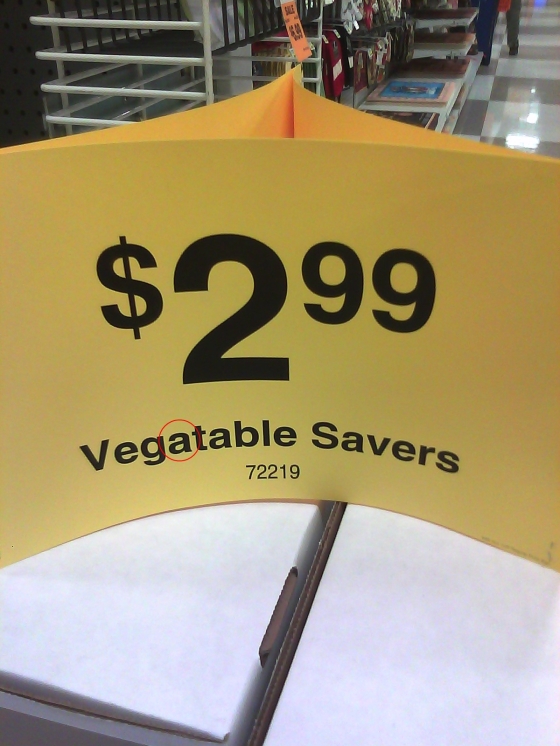 Oh my. Look what I found inside the post office yesterday: 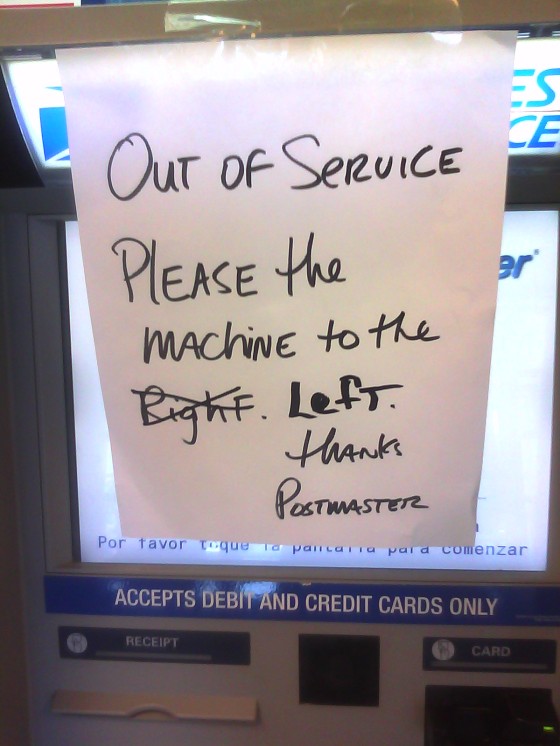 Where do I even BEGIN with this sign? Firstly, the machine to the left must be really lonely without its broken companion if the postmaster is assigning the task of pleasing it to its customers. Secondly, how is it that the postmaster noticed that “right” was incorrect, but failed to notice that the word “use” was absent?

What baffles me the most, however, is that the postmaster couldn’t take an extra ten seconds out of his or her day to simply write out a new, clean note. Nice reputation you’re making for yourself, USPS!